SB 435, the “Ending Online Sexual Trafficking and Exploitation Act”Immediate Action to Provide Relief to California Workers and Small BusinessProtecting Frontline Nurses and Other Healthcare WorkersFurther Oversight of EDDCovered CaliforniaCOVID-19 By the Numbers in the State and NationState Resources Posted on My Website 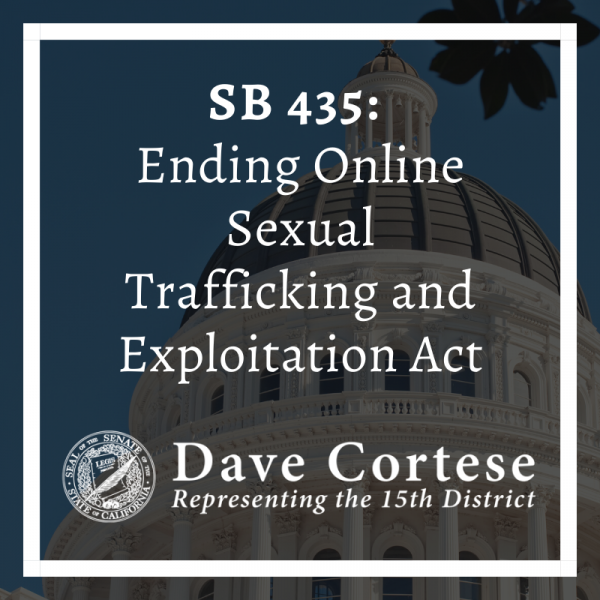 Sex trafficking and exploitation, with unwilling victims of all ages and identities including children, is a major issue in our state, and the internet is its biggest platform.

Content that is uploaded to the internet each day includes rape, child rape, “revenge pornography”, and other forms of sexual assault.

In addition, we hear stories from women and others everyday where photos and videos they took in private that were originally consensual are then shared and distributed across the internet without their consent.

Last week, along with the California Women’s Law Center, local advocates, and sexual assault survivors, I introduced SB 435, the “Ending Online Sexual Trafficking and Exploitation Act”, to end the sharing of sexual photos/videos without consent and to dismantle a billion-dollar industry that is profiting off of child sexual abuse, sexual exploitation, sexual assault, and rape.

This bill, a first of its kind, will put power in the hands of those who are victims of online trafficking by providing them with sufficient legal avenues to fight back against their perpetrators.

Once a victim has given notice that their image or video has been posted online, the distributor has a two-hour safe harbor to take down this content. After that two-hour period, the victim may seek statutory damages of $100,000 for every two hours of online exposure, and, if the victim in question is under 18 years of age, this amount is doubled to $200,000 in damages for every two hours of exposure.

Supporters of this bill include Community Solutions, The Audrie Pott Foundation, Next Door Solutions to Domestic Violence, The Enough is Enough Voter Project, and The Coalition Against Trafficking in Women.

Our workers and small business form the backbone of our state’s economy. With so many small businesses struggling to make ends meet since the beginning of the pandemic, we must do everything we can to get them the help they need as soon as possible so that they can keep their businesses operating and their workers paid.

The State Legislature is currently reviewing an immediate budget action proposal which includes $9.6 billion in relief for individuals, families, and small businesses most impacted by the COVID-19 pandemic. The proposal will be heard by the Senate Budget and Fiscal Review Committee on Thursday February 18th and the full State Legislature on Monday February 22nd.

The immediate relief package includes two bills that I have co-authored by: SB 87 (Caballero) and AB 80 (Burke).

SB 87 will build on the $500 million California Small Business COVID-19 Relief Grant program that began in December 2020 by providing an additional $2.1 billion in grants of up to $25,000 for small business and non-profits impacted by the pandemic, with $50 million being set aside for grants to cultural institutions.

Here in our District, I worked to develop the Silicon Valley Small Business Development Center (SBDC) that has been assisting hundreds of businesses access the resources available to them during COVID-19, including Federal Economic Injury and Payroll Protection funding. Californian hard-hit small businesses have received more than 750,000 Paycheck Protection Program (PPP) loans to keep their workforce employed since the beginning of the pandemic.

AB 80, the Paycheck Protection Program Partial Conformity Act, will provide $2 billion in tax cuts to small businesses by enabling them to deduct up to $150,000 in business expenses paid for with federal PPP or Economic Injury Disaster Loan Funds.

The full relief package includes a total distribution of 5.7 million payments to Californians, with those making $30,000 or less as well as those who weren’t eligible for previous federal stimulus dollars being prioritized.

Read further at this link for details.

Our nurses are at the forefront of our state’s efforts to combat COVID-19, putting their own health at risk every day of this pandemic to provide life-saving treatment and care. That is why I have introduced SB 213, sponsored by the California Nurses Association, to modernize outdated California laws and make it easier for registered nurses to access the workers’ compensation system, just like the law currently protects other frontline healthcare workers. These frontline heroes deserve adequate and equal protections to ensure their own safety and the safety of all of us. Learn more at this link. 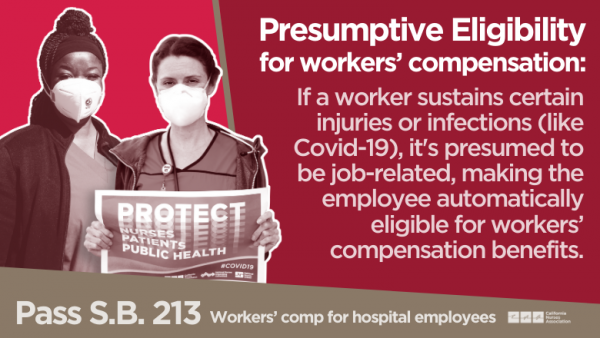 One of the many challenges I’ve inherited as a brand, new Senator is the massive breakdowns at the Employment Development Department (EDD). I have requested that EDD as well as Bank of America, by way of its contract with the state, undergo ongoing auditing to resolve fiscal issues that are harming taxpayers in the state of California. A common practice for banking institutions as well as the IRS, ongoing auditing procedures can ensure these patterns don’t continue and EDD’s larger systemic problems are addressed. My local Senate office has been individually managing and expediting hundreds of EDD cases at a time to assist constituents and provide them the relief they need during the pandemic. The fact of the matter is benefits being unfairly delayed or denied is unacceptable. The people of California are clearly asking more from us than this. Listen to my recent interview on the topic at this link.

Covered California has established a special-enrollment period in California that allows any eligible Californian to enroll in health coverage between February 1st through May 15th.

Millions of Californians have enrolled in affordable high quality health coverage through Covered California since the landmark program began, resulting in around a 10% increase in the number of Californians who have health insurance.

If you still need health coverage for 2021, enrollment is open. Visit CoveredCA.com. 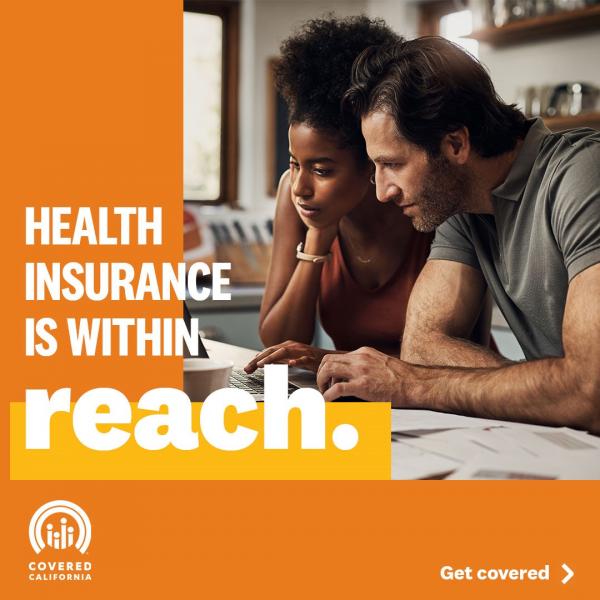 COVID-19 By the Numbers in the State and Nation

For more COVID-19 data provided by the CDC, click here 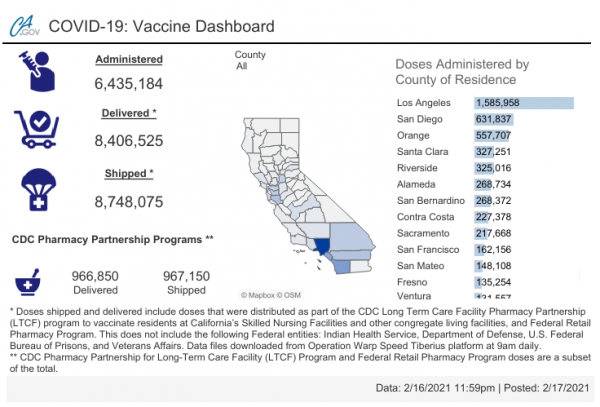 As of February 17th, there were 274 COVID positive patients hospitalized in Santa Clara County (down from 377 the prior week and 487 the week before that) More data can be found through the Santa Clara County Public Health Department’s Data Dashboards.

Santa Clara Valley Medical Center continues to offer free drop-in and appointment-based COVID-19 testing at several locations across the county. Residents can book an appointment for various sites in Vietnamese, Chinese, Spanish, or English. Visit www.sccfreetest.org to search for an available site by City or Date, or to see the complete list of available County testing sites.

The County’s COVID-19 Vaccine Dashboard continues to be updated daily with information about vaccine allocation and administration by healthcare providers throughout the county. The latest updates on vaccine eligibility and how to schedule an appointment are available on the County’s website at sccfreevax.org. In addition, residents without internet access or who need additional assistance can make appointments for the County Health System vaccine sites through the Valley Connection Call Center at 408-970-2000. The Call Center is open Monday through Friday from 7am to 9pm and Saturday and Sunday from 8am to 4:30pm. Assistance is available in English, Spanish, Vietnamese, and other languages. 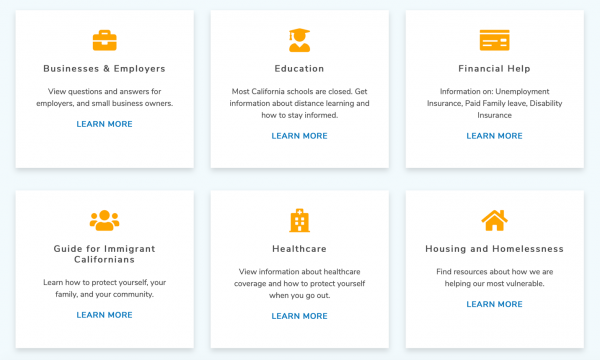 State resources and services available during the pandemic have been posted on my new website: sd15.sen.ca.gov. Just click on the "COVID-19" link under the “Resources” tab of my website to get connected to some of the most frequently used state resources, including resources for businesses and employers, students, those in need of housing and financial assistance, and more.

As always, please feel free to reach out to me with any questions, comments, or concerns. I can be reached at senator.cortese@sen.ca.gov.